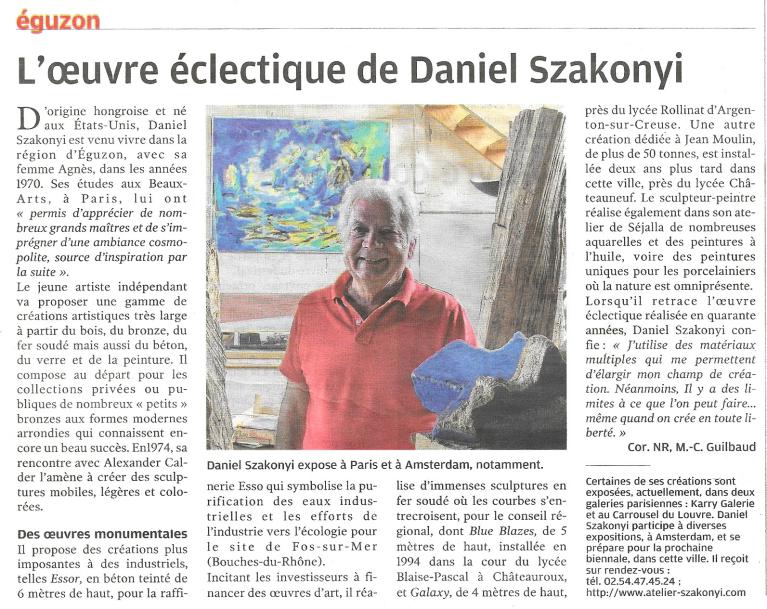 I  hope you’ll enjoy discovering  a significant selection of my work.

I was born in Chicago in 1946 on the near north-west side not far from Lake Michigan and the skyscrapers of the Loop. Our family vacations (in the 50’s) were centered around fishing in northern Wisconsin. Far away from the urban environment I discovered another world, deep in the forests. At age 14 I created my first sculpture in wood –a relationship that is still vital for me. It wasn’t till four years later that I was able to begin studying at the Art Institute of Chicago, then at Dartmouth College and afterwards, at the Beaux-Arts de Paris (1969, 1970).

Sculpture, wood and nature became intimately linked to my conception of art. And maybe that’s why I am living in the country in the center of France. The fact that my wife was born nearby may also be a reason.

Of course, there is more to it than that !The environment is stimulating for many reasons : an old farmhouse in the foothills of the Massif Central provided the necessary space for my work to develop, and gave me the opportunity to understand nature via a vegetable garden, fruit trees and centennial oak trees. Also, the area as many regions in France has a rich historical past, such as one of the oldest prehistoric campsites dating back to 900,000 years B.C…. Some years  ago during a visit to the Art Institute of Chicago I was surprised to see 2 Claude Monet paintings of  La Vallée de la Creuse. It shows the covered  with heather in bloom. The site is only 10 kilometres down the river.

Of course color has always been a constant concern with my sculpture.

Whether it was to  mix natural pigments (oxides) with white cement or selecting different tones of glass for my mobile sculptures.

Since I’ve been in France I’ve had the occasion to  sift through history and appreciate its rich heritage. And of course there is such a long tradition of painting outdoors landscapes.

I  began  exploring this realm when living next to  the « Alpilles » mountains near St. Remy de Provence. The hospital  where Vincent Van Gogh was interned after the incident in Arles was within a short walk.

As I moved about in France, painting & drawing outdoors  became more than an exercise but  another approach to nature . The theme of water   continued through my work when I  moved to Amboise where I tried to capture the specific silvery light of the Loire river. Now I’m living near the Creuse river, but I also enjoy painting  along the sea on the Atlantic coast with its vast horizons.   Each place has its palette of colors.

Then there are the imaginary landscapes  that are based on memory and others that are the expression of the inner landscapes . These are composed spontaneously with watercolors which I see as short poems written by brush.

A FEW COMMENTS ON MY WORK

All four elements are recurrent  in my work :

My first major commission in 1973, took the form of a wave at the Esso refinery near Marseilles : Esso (Exxon) had installed a new water purification plant and this became the « raison d’être » for the sculpture. My idea to create a permanent symbol dedicated to pure water was thus approved and financed. This work named « Essor » was perhaps the first monument to Ecology ! It is unfortunately unknown to the public as it has been well protected inside what has become an industrial bunker.

I’ve been familiar with ceramics all my life and it was in Limoges, at the famous manufacturer Haviland et Parlon, that I completed two series of porcelaine sculptures and edited a table setting there (1983-86).

Metal was used to make two of my main monumental works (1994, 2000). I was fortunate enough to find a competent ironsmith to make these pieces for me (Blue Blazes, Galaxie). Iron, whether raw or painted, is made to last. In the mid-seventies I had already created a series of small sculptures in a foundry specialized in the sand-mold technique. I also had some of my original wood sculptures cast in bronze and polished.

For  me, mobiles are wind and watercolours united : I use many shades of cathedral glass (vitrail) and attach them to a light metal structure which moves at the slightest gust of wind or breath. These sculptures can also be seen as models for larger scale works, following the path of  A. Calder.

Besides all these different materials, there is also the wondrous  invention called concrete which has permitted man to build giant bridges amongst so many architectural works. I am particularly confident that the 50 tons that were used to erect the « Monument à la Résistance » (2003) will remain a symbol for generations to come.

It is officially visited by the remaining survivors of the Résistance  period and used for hosting ceremonies for commemorating the victory over Nazism.

Sculpture can have another social function  : a teacher whose classroom is next to the sculpture  »Galaxie » told me how it has become the gathering place for students and of  her pleasure to see it every day under  many various skies.

At this moment a series of sculptures in cement allows me to develop new volumes and low-reliefs where the textures and surfaces are intimately linked to the gesture.